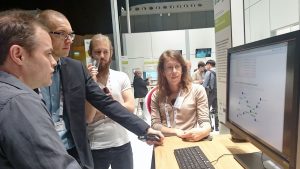 As previously announced, the MICO project was presented at IBC 20106 (Sep 9-13) with a demo at the Fraunhofer IDMT booth. The following provides a summary of

Overall impressions from the exhibition

Considering that the demo was about an integrated prototype from a EU project (while most visitors tend to be focused on ready-to-use-products), we were very happy about 30+ companies visiting us at the booth. We also had the impression that the demo setup using several sets of introductory slides and demos worked well in order to quickly adapt to visitor interests. On the other hand, screen-casts were rarely used and did not prove that useful.

Regarding individual topics, visitors tended to be most interested in

Feedback regarding the overall MICO challenges and platform 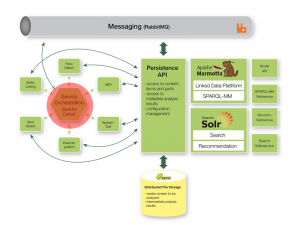 Judging from discussions at the booth, broadcasters do not yet have solutions in place for multi-/cross-modal and context-aware multimedia analysis, semantic search and recommendation. Many of them, however, are fully aware that this will be a key question, especially for archives, and that they need to make strategic decisions about this in the very near future. Therefore, they were interested in how MICO dealt with the respective technical challenges, and what our position regarding follow-up projects was.

The fact that the MICO platform is an integrated prototype which needs to be significantly extended did not surprise visitors: They did not expect a ready-to-buy product, but were all the more interested in how they could be addressed after the project lifetime. Topics for improvements that came up during discussions included e.g.

All in all, it became clear that MICO has a lot to offer to many visitors, and there was positive feedback especially to the following domains:

The fact that the MICO core is available under a business-friendly Apache license, and that the overall approach is aiming at combining OSS and CSS extractors, was very useful for these discussions.

Feedback regarding extractors and extraction

Almost all visitors were aware of the potential of using automatic extraction (especially those from the archive domain). However, many had only limited practical experience with automatic extraction so far, and in almost all cases, things seem to start with Automatic Speech Recognition (ASR) and Named Entity Recognition (NER). Consequently, questions related to ASR and NER such as the following emerged frequently:

After the exhibition, we therefore decided that this should be addressed with an additional ASR / NER report.

Regarding A/V extraction, requests were mostly related to person identification, i.e. face detection / recognition, and speaker discrimination / recognition. Beyond that, there seems to be a general interest to be informed what is technically possible audio and visual analysis possibilities – several visitors claimed that is is very difficult to keep an oversight over this.

When asked about overall needs regarding extraction, not surprisingly, most visitors indicated a string interest in extractors suitable for the detection of persons, locations, events and objects. Moreover, it seems clear that there are many cases where detection should not only be based on general concepts, but should also support custom vocabularies and user training. This also goes for the detection of semantic concepts – a discussion which almost always included the notion of CNN and deep learning approaches 🙂

Feedback regarding MICO showcases and tools

Finally, there was also a lot of interest in individual showcases, regarding:

The feedback from visitors confirmed that the intended use cases were relevant – we now need to make sure that the activities in all these domains will be continued.

In summary, IBC proved to be a fruitful event for MICO and our intentions to follow up on the MICO activities. Beyond the many R&D aspects involved, it also became clear that there is a demand regarding consulting interested organizations in their decisions regarding (multi-modal) automatic metadata extraction and related aspects. 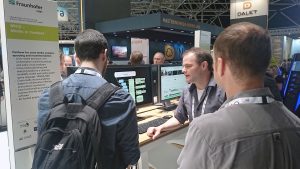 As for general requests regarding the MICO platform, we told all interested visitors that the best time to follow up and to download and try will be in November/December. We promised to provide and update via e-mail by then.