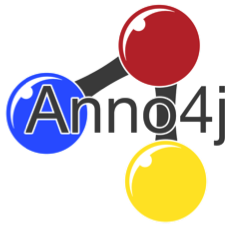 The Object-RDF-Mapping library Anno4j recently released a new version 2.3, which was done as a result to the newest draft of the Web Annotation Data Model WADM in July 2016 by the Web Annotation Working Group. The newest WADM draft introduced new additions and some changes to the existing model. The library adapted to that state. Discussed here are the major changes done to the library.

A New Set of Classes

All classes supported by the WADM are now implemented and available by default via Anno4j. Some of them had been omitted so far, others are new additions in the latest edition of the model. The added and/or adjusted classes are:

A new feature with corresponding RDF classes are the Collections of Annotations. Collections are utilised when multiple Annotations are to be retrieved by a client. Two major classes with respective relationships and properties have been added:

New Selectors have been added to the previously available set. The new ones are:

Addition and Alteration of Relationships and Properties

Next to new classes introduced by the newest WADM version, new relationships and properties have also been added to Anno4j:

Some properties and relationships that were used for provenance information got reworked and renamed (see here), formerly known as oa:serializedAt, oa:serializedBy, oa:annotatedAt, and oa:annotatedBy:

In the previous version of Anno4j, not all multiplicities and cardinalities were implemented correctly. Now, all of them are implemented accordingly.

The Anno4j library is built upon the OpenRDF library Alibaba, and can therefore benefit from its API as well as Java advantages.

This website uses cookies to improve your experience while you navigate through the website. Out of these, the cookies that are categorized as necessary are stored on your browser as they are essential for the working of basic functionalities of the website. We also use third-party cookies that help us analyze and understand how you use this website. These cookies will be stored in your browser only with your consent. You also have the option to opt-out of these cookies. But opting out of some of these cookies may affect your browsing experience.
Necessary Always Enabled
Necessary cookies are absolutely essential for the website to function properly. This category only includes cookies that ensures basic functionalities and security features of the website. These cookies do not store any personal information.
Non-necessary
Any cookies that may not be particularly necessary for the website to function and is used specifically to collect user personal data via analytics, ads, other embedded contents are termed as non-necessary cookies. It is mandatory to procure user consent prior to running these cookies on your website.
SAVE & ACCEPT