Snapshot Serengeti is a citizen science project that invites volunteers to identify animals in previously unseen automated camera trap images. Users will annotate the images, with species present, number of animals, and also what behaviours they currently perform. The linked Talk application also allows user to add hashtags, write comments and have discussions about those images as shown to the right.

One of MICO’s goals is to support Zooniverse in more easily gaining insights into the images by performing content analysis on the images and comments. This blog post focuses on a specific aspect of this use case – the detection of the competence, or skill level, of a user by analysing that user’s comments. This involves distinguishing comments that are questions or opinions from others that provide facts, feedback and clarifications.

For the training of a competence classification we extracted a (denormalized) view over the Snapshot Serengeti user data with about 100,000 entries, each containing the following fields:

Typically when you train a categorisation model what you start with is the ground truth. You would select a sub-set of the 100,000 comments and manually classify each comment according to your defined categories. However for this use case the decision was made to skip this manual process and try to create the training set by using heuristics to reason about the provided data.

For establishing those heuristics the data was first imported into Open Refine  as this tool provides a powerful means to clean, filter, facet and visualize data.

The following screenshot of Google Refine (as Open Refine was previously known) shows the facets used to analyse and filter the Snapshot Serengeti data. 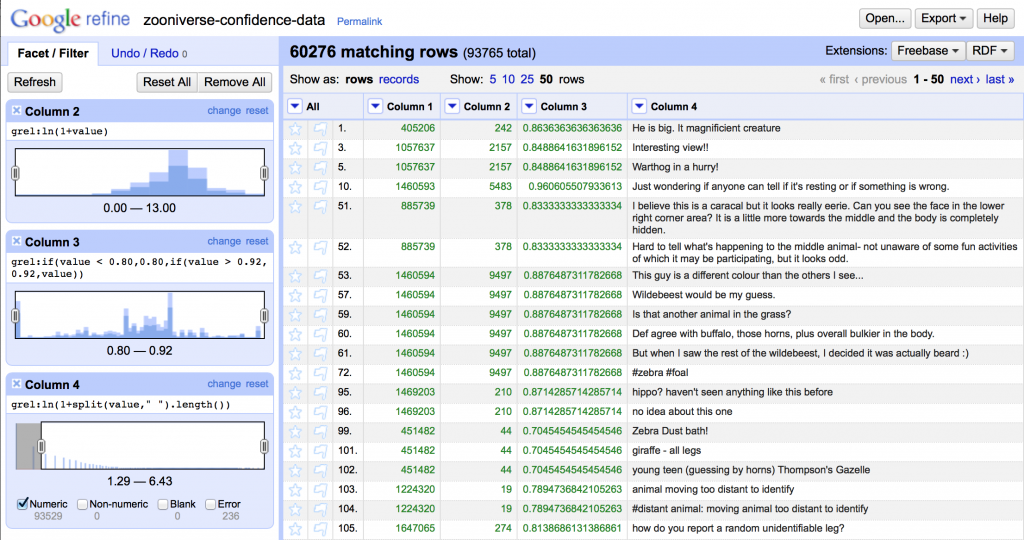 The chosen facets are:

Note that Open Refine allows us to define filters over facets. The above screenshot shows such a filter over the third facet (over column 4) that excludes all comments with less as three words. Rows not matching the currently defined filters are not shown in the list. This feature is critical for the definition of heuristics and the validation of the same.

Establishing the Heuristics for the Training Set

For this we can apply a filter on the third facet. Such a filter is actually shown in the above figure. Empty comments are shown as errors and comments with less as three words are represented by values `<= ln(1+2) = 1.099`. So the filter `[1.29 – *]` as shown in the figure will include all comments with 3 or more words.

As the figure shows, there are about 60,000 user comments with 3 or more words. When looking at the other two facets one can also see lighter and darker blue sections in those facets. The lighter blue area represents filtered rows while the darker blue represents the percentage of none filtered rows. The fact that the percentage of lighter and darker blue areas is about evenly distributed over the whole area of the other two sections indicates that the length of the text does not provide an indication of the competency of a comment.

For creating a training set we need to define competency levels to rows in the provided dataset. To make things easier the decision was to go with only two categories:

Assignment of dataset rows to those categories is based on rules using the following definitions:

Applying those Rules to the Data Set

When applying the above rules to the Snapshot Serengeti user comments one obtains the following statistics:

For competence classification the OpenNLP Doccat functionality was used. For the training of such models one needs to create a text file where each line represents a training example. The first token of the line is the name of the category (COMP or INCOMP). The remainder of the line is the content. The following listing shows the first 4 lines of the trainings set created by applying the rules defined in the previous sections onto the Serengeti Snapshot user comments data.

Using this file one can train a Doccat model by using

Wrapping this code with a command line utility one can easily train OpenNLP Doccat models.

For training the Doccat model for the Competence Classifier iterations where set to 10000. Training completed with

With version 2 of the MICO Platform a new Content Classification Extractor will be introduced.

This extractor will search processed items for a text/plain asset and classify its content by using the configured OpenNLP Doccat model. In addition this extractor can be configured with a SKOS thesaurus that allows to map the String categories used by the Doccat model to SKOS concepts defined in the thesaurus. This mapping is done based on values of the skos:notation property.

For the competence classification this Extractor will be configured with the OpenNLP Doccat model trained as described in the previous section. For mapping the categories to a thesaurus the following SKOS Thesaurus was defined:

Text annotations in Mico are based on the Fusepool Annotation Model (FAM). Therefore Content Classifications in MICO follow the Topic Classification scheme as defined by the FAM.

as created by the OpenNLP Classification Extractor:

NOTE that the above listing does not include triples for the mmm:Item, mmm:Part and mmm:Asset