For the MICO project with all its produced metadata, we designed an own RDF ontology that is capable to publish and contain all required information in a standardised and harmonised manner. The MICO Metadata Model MMM builds upon the Web Annotation Working Group‘s Web Annotation Data Model WADM, and especially its core concept of the Web Annotation, which is defined “as a piece of further description (e.g. marginalia or highlight) for a digital resource like a comment or tag on a single web page or image, or a blog post about a news article”. The MMM adapts the Web Annotation in order to express intermediary and final results of given extractors. Those results are combined with the ingested multimedia objects in order to create a fully integrated metadata background for the respective object. To do this, the MMM consists of five core modules: 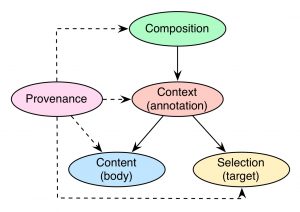 Modules of the MICO Metadata Model

The roles of the Context, Content, and Selection module are adapted from the Web Annotation. The Composition module adds a layer on top of the results represented as Web Annotation, introducing features to create interlinked results to form the combined metadata background. Provenance features are added at various levels of the complete model in order to establish traceability of the results and workflows and add provenance information like timestamps, creators, and so on. Ultimately, abstracting from RDF details and additional nodes to keep it simpler, a complete result object of the MICO platform looks like this:

Exemplary structure of a result in the MICO platform

The item at the top represents the ingested multimedia object that has been sent to the MICO platform. Various extractors now add their (possibly multiple) parts to the whole metadata background that is created for the item. Every part itself adapts the structure of a Web Annotation, containing the information content and the target of the annotation (e.g. the whole multimedia object, or only temporal/spatial fragments of it). Different parts and their targets can be interlinked in order to generate the traceable path of work that has been fulfilled successively.

For further information about RDF details please consider the official documentation of the MMM, one of the specification deliverables of the MICO project (volume 2 or volume 4), or the paper “A Platform for Contextual Multimedia Data – Towards a Unified Metadata Model and Querying” (which features a little bit older version of the model, however the ideas and the background remain the same). The MMM has been extended by a sub-ontology MICO Metadata Model Terms MMMTerms, which features MICO specific implementations of some of the extractors implemented during the MICO project. A Java-based application to make use of the MMM has been implemented via the open source library Anno4j. For a guideline of how to use Anno4j, refer the last tech deliverable of the MICO project (volume 5, which is soon to be published here) or the paper “Anno4j – Idiomatic Access to the W3C Web Annotation Data Model” in the ESWC 2016 Satellite Events.