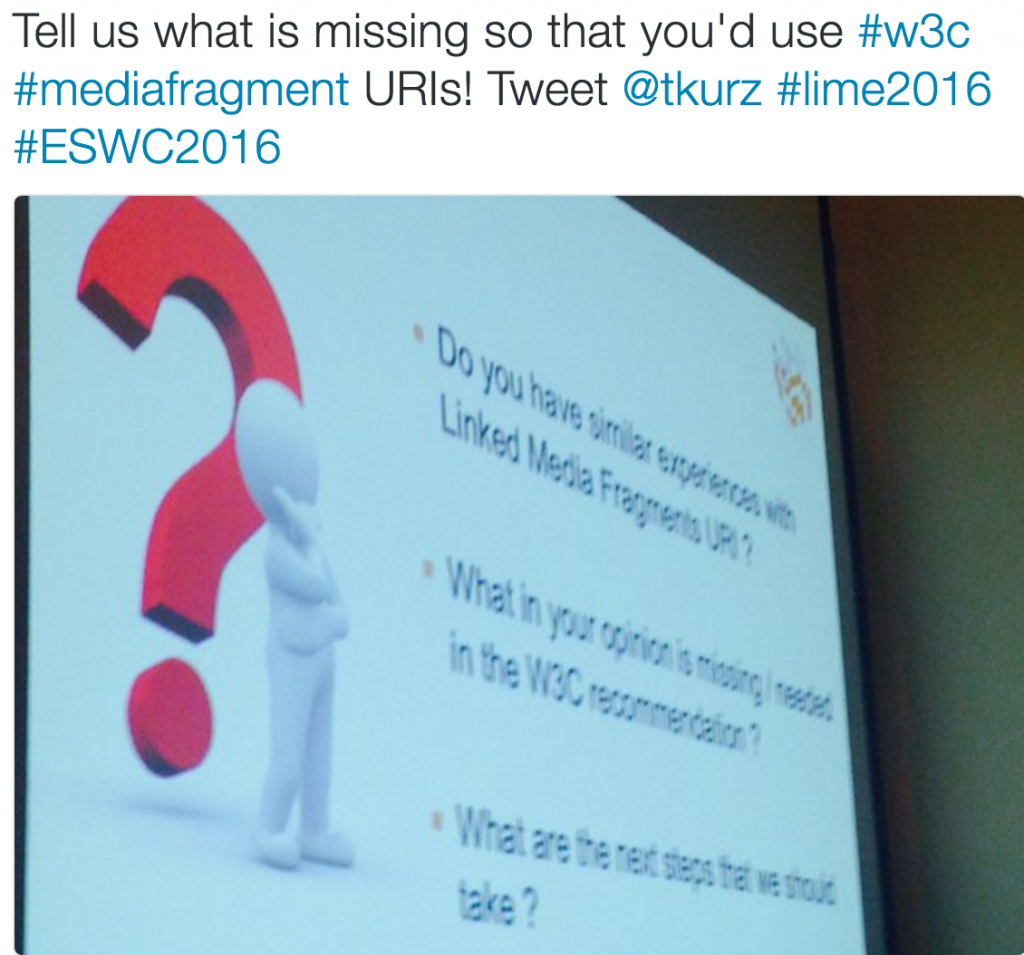 Last week MICO co-chaired the 4th Workshop on Linked Media (LiME) at the 13th Extended Semantic Web conference in Crete. Our team provided inspiring presentations and participated in discussions around the topic Linked Media – a central topic also of the MICO project.

Lyndon Nixon, lead researcher of the Linked-TV project and co-founder of the LiME workshop series took the role of the moderator and the devils advocat. He introduced the session with a short history of Linked Media and raised critical questions such as ‘Where is Linked Media going’ and ‘Is it worth taking it there’.

This introduction was an appropriate bridge to the keynote held by Ruben Verborgh about his experiences with Multimedia in the Semantic Web, which have not always led to successful solutions. After summarizing his work in the topic he clearly pointed out that the Semantic Web per see is not the “deus ex machina” (which it often claims to be (direct quote)). But the derivative technologies now possible due to modern media analysis such as deep learning are now bringing the Web of Media and the Web of Data closer together.

During the workshop we heard some interesting work mainly driven by the MICO project but also from other projects such as Linked TV. The slides for the talks are available on the workshop page. The talks covered a broad range of Media specific topics such as Media annotation models and standards, analysis engines and scheduling as well as cross-media recommendation. We realized, that projects and frameworks in the area of Linked Media are quite similar from the basic setup but follow different approaches regarding distribution, component communication and workflow management. The best paper of the workshop voted by the workshop chairs based on the blind reviews was “Idiomatic Persistence and Querying for the W3C Web Annotation Data Model” by Emanuel Berndl, Kai Schlegel, Andreas Eisenkolb and Harald Kosch. Within this work the authors presented Anno4J, a model driven Object/RDF mapping framework which allows transparent access to the Web Annotation Model via Java.

One of the main results of the workshop was a consensus that the Linked Media community though small is producing valuable results. We also agreed that, Linked Media is not just about RDF, SPARQL and DBPedia but about bridging the gap between the Web of Data and the Multimedia Web. We agreed that the main effort of the past years which focused on how to produce linked datasets now has to switch to how to consume it and how to use the benefits of Linked Media in real world Multimedia applications.

We are looking forward to these next exciting steps!

This website uses cookies to improve your experience while you navigate through the website. Out of these, the cookies that are categorized as necessary are stored on your browser as they are essential for the working of basic functionalities of the website. We also use third-party cookies that help us analyze and understand how you use this website. These cookies will be stored in your browser only with your consent. You also have the option to opt-out of these cookies. But opting out of some of these cookies may affect your browsing experience.
Necessary Always Enabled
Necessary cookies are absolutely essential for the website to function properly. This category only includes cookies that ensures basic functionalities and security features of the website. These cookies do not store any personal information.
Non-necessary
Any cookies that may not be particularly necessary for the website to function and is used specifically to collect user personal data via analytics, ads, other embedded contents are termed as non-necessary cookies. It is mandatory to procure user consent prior to running these cookies on your website.
SAVE & ACCEPT